A summary of archaeological research
in Steenbokfontein farm and nearby areas:

Archaeological work done thus far at Simon se Klip koppie at Steenbokfontein farm, shows that groups of “Bushmen” people visited the caves and top of the koppie during different periods of time over the last 9000 years. The Bushmen, or KhoiSan people, were hunting and gathering people, that depended much on seafood (shellfish), fish, shorebirds such as cormorants and penguins, seals, crayfish, plants, underground roots and corms as well as antelopes of various sizes and tortoises as a source of nourishment. Sometimes, a beached whale was a feast to many.

Their technology was simple but effective: they used stone artifacts attached to some kind of handle or to an arrow shaft to make tools such as scrapers to work hides, adzes for working on wood and making their windbreaks or temporary living shelters when not in the cave, and arrows for hunting animals. Most of the rock art found on the walls of Steenbokfontein Cave was done by them, and its meaning relates to profound spiritual aspects of their society, such as mythologies, cosmology, and the life order in close connection with the natural world and landscape.

In the last 2000 years, other groups that herded small stock usually occupied the top area of the koppie, where they penned their animals using rocks and probably thick bushes as well. These more recent visitors were either impoverished Khoikhoi people or Bushmen who had learned how to keep stock. They also left a rock art painting at the back of Steenbokfontein Cave where a man with two fat-tailed sheep is depicted.

But by far, much of Steenbokfontein caves contents resulted from repeated visits by Bushmen hunting and gathering groups to the koppie and surroundings over the last 9000 years.

Only Steenbokfontein Cave and Elands Bay Cave further south were occupied around 10 000 and 9000 years, showing that people moved far and wide, between the Oliphants River valley and the coast, and also from between the Olifants River mouth up north to the Berg River mouth and passing by the koppie and staying there for a few days or a couple of weeks at a time. We know so because they brought back bits of stones of a type that you cannot find in the coastal area, but in fact in the places just mentioned.

Later on, life got tough for the Bushmen between about 8000 and 4500 years ago, as the climate conditions were dry and hot, and frequent drought ravaged the land. Moreover, sea levels were about 2 to 3 meters higher than today, meaning that many of the current reefs opposite the far were drowned but new ones formed behind. Until excavations went on at Steenbokfontein Cave, researchers thought that people had left the area because of the unfavorable conditions that would have also negatively affected plant cover and animals on which people would have depended. Nevertheless, Steenbokfontein Cave shows us that this was not the case. While the Bushmen reduced the frequency of visits to the coast, they nevertheless persisted and endured the dry and hot climate by adapting to the new conditions and never gave up on adversity. They continued to travel far and wide, this time bringing or bartering from other people a type of pigment material (“specularite”) that can only be found in the interior of the Northern Cape. It is possible that while they stayed at the cave during this hot and dry period, they also met other groups, shared company, and meals, marriages were brokered, they also exchanged information and gifts, told stories to the young members of their bands, thus continuing with their rich tradition and culture.

As the adverse climate conditions ameliorated and more temperate conditions set in around 4500 years ago, visits to the koppie and elsewhere in Elands Bay and Lamberts Bay were more frequent. This meant that the numbers of people in the general area increased significantly as reflected by the many new sites around 3500 years ago. By then, people hunted and gathered as before, with seafoods contributing half of the Bushmen diet. When population densities increased even further by about 3000 BP, people began to focus on seafoods much more than veldkos, although tortoises were most frequently collected. Rain fell frequently for the next thousands of years, but the level of veldkos and hunting small bucks was so intense as to diminish their numbers. In fact, large bucks like the eland were scarce at that time. Only small tortoises were left, and people relied heavily on seafood, collecting vast amounts of mussels, limpets, and whelks from nearby rocky shores. As a result, very large shell middens, so-called “megamiddens” were accumulated behind the reefs between Lamberts Bay and Elands Bay. It is not clear at this stage why the local Bushmen did not go away when the food situation on the land was becoming a problem (less of it). Moving elsewhere would have avoided possible competition and conflict over food sources. It is therefore possible that local Bushmen became strongly identified with the landscape, a sense of belonging that not always accompanied well all decisions about making a living. But it seems that they found ways to minimise tensions among themselves, such as getting together and gathering in numbers at Steenbokfontein Cave as they did during the “bad times”, when hot and dry conditions shortened their stays at the copy and hastened their travels around the landscape.

Living mainly at the coast and from seafood came to an end about 2000 years ago when probably other Bushmen, who had learnt to keep sheep and possibly goats, came into contact with the locals coming from the northern territories and passed on the knowledge how to keep domestic animals. Somehow, the idea of keeping small stock took on quite rapidly among the locals, a solution to a rather difficult way of life during the preceding centuries. Pottery came in a little later and, as a new technology, it probably had advantages that were locally valued. Even broken vessels would be used for various purposes. Having sheep and goats probably stimulated the need to move away from the koppie and the local area, and a different solution to their living would have also disrupted previous social norms and identification with the landscape which had stopped them moving away from the Lamberts Bay and Elands Bay areas. In the last 2000 years, people were organised into smaller groups that don’t seem to have travelled far and wide as Bushmen did before thousands of years earlier, and rather moved frequently around the Sandveld and coast. While some of them kept small stock, many different types of wild foods from the seashore and the land were still part of their daily meals. Some centuries later, by about 1800 or 1500 years ago, fully-fledged pastoralists, similar to the well-known Khoi or “Khoenkhoen”, owners of hundreds of heads of cattle made their way along the west coast, but they usually chose other places for settlement such as next and among large granitic boulders in the Vredenburg Peninsula situated further south.

PS: My (Antonieta Jarardino) advice with the tours is that people move carefully over the surface of the cave’s deposit, and no attempt at all should be made to throw water on the rock paintings to make them more visible, as doing so would damage them. Antonieta Jerardino. 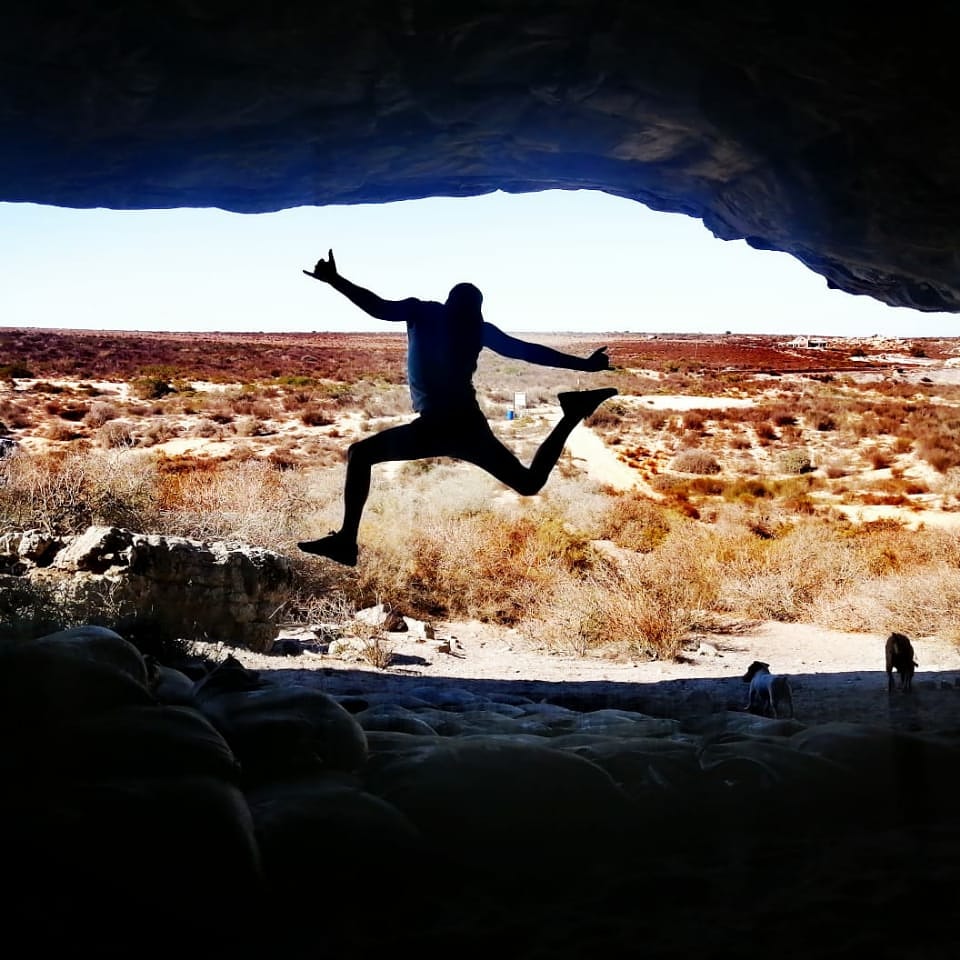 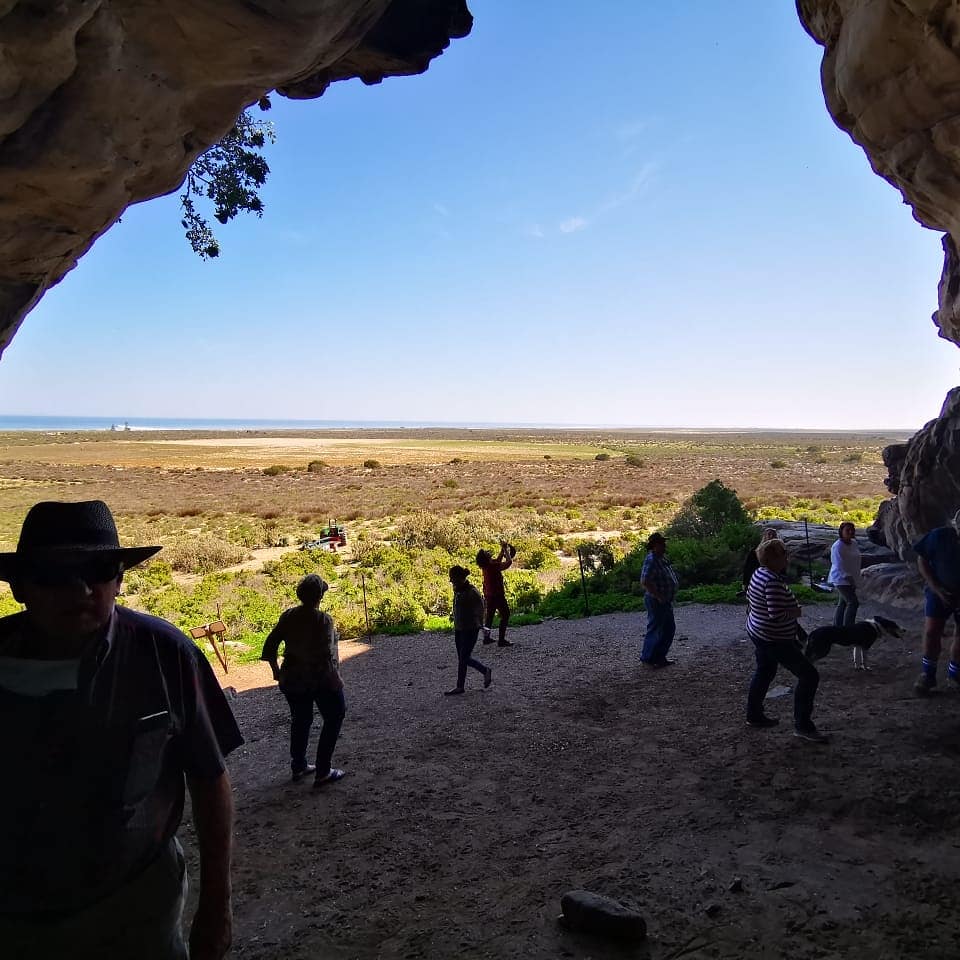 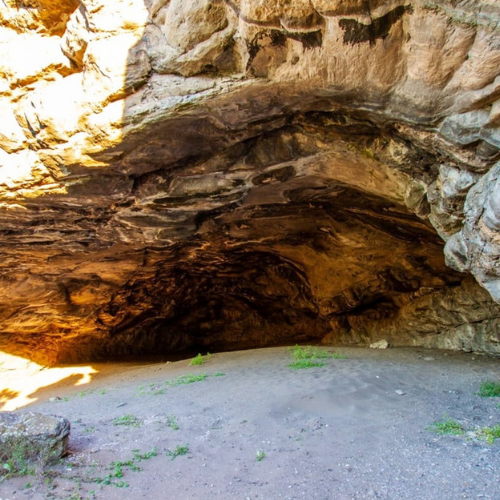 The making of the Cave Project

A team of musicians, photographers, film makers and recording engineers visit a cave off the West Coast of South Africa to record a double album over 3 days. This recording project is based on an intention to create music and sounds that soothe babies in utero and outside the womb, as well as pregnant women. Disc 1 is a series of interlocking rhythms by Intone while Disc 2 is a collection of mesmerising Xhosa songs composed by Indwe that centre on the theme of motherhood and femininity, and which Intone supports rhythmically. This album is available on all digital platforms:  https://music.apple.com/za/album/the-…